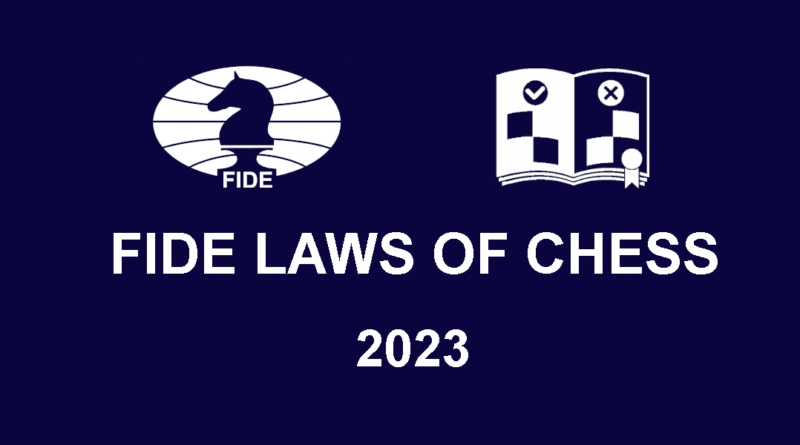 The Rules Commission has just published the new version of the Laws applicable from January 2023.
You can read and download the new Laws here,  including a very detailed table of changes. This version, approved in Chennai during the last General Assembly, is a team effort, led by former Chairman Mahdi Abdulrahim and Secretary Mehrdad Pahlevanzadeh.

We must also underline the meticulous work of the new Secretary, Marco Biaggioli and the Senior Adviser, Mike Hoffpauir: with the help of the new team, they corrected typos, referenced articles that changed numbers, set the correct format of the paragraphs, etc.

What are the main changes?

– Penalties in rapid chess.
“A.3 The penalties mentioned in Articles 7 and 9 of the Rules for Competitive Chess shall be one minute instead of two minutes.”
In 2022, the arbiter of a rapid game gave two extra minutes when the opponent completed an illegal move. The same if a claim for a draw is found incorrect. In 2023 it will be only one minute. It was already one minute in blitz.

– In 2022, you won if your opponent resigned. In 2023:
Art. 5.1.2 was reworded. It’s a small change made to avoid interpretation problems in cases such as when a player resigns against a bare King, in a drawn position, or both opponents resign simultaneously.

– We don’t “stop” the clock but we “pause” the clock… Too literal a reading might inspire a joker to turn off the clock during the game.

The Rules Commission will soon publish the approved translations into the congress languages (Arabic, Chinese, French, German, Russian and Spanish). In the meantime, on behalf of the Rules Commission, I wish you the warmest Season’s greetings and a happy new year 2023!

And, of course, an excellent reading of the new Laws!

Manage Cookie Consent
To provide the best experiences, we use technologies like cookies to store and/or access device information. Consenting to these technologies will allow us to process data such as browsing behavior or unique IDs on this site. Not consenting or withdrawing consent, may adversely affect certain features and functions.
Manage options Manage services Manage vendors Read more about these purposes
View preferences
{title} {title} {title}