The Chairman Ashot Vardapetyan welcomed all present and summed up last two years of the activity of the RC. He pointed out that the most important topic for the present RC meeting is to finalize the Competition Rules (General Regulations for Competitions). However, the Handbook structure must be revised in the near future. During the CBC meeting a four person committee (T. Delega, L. Freyd, R. Haring and M. Kaloumenos) was formed to deal with this matter, if will be approved by GA.

The Secretary Tomasz Delega explained reason, why RC has started this job. In the FIDE Handbook we have regulated this same matter in different way on the different sections. This is of course not good and complicates tasks for the organizers and arbiters. He presented a first draft of the new structure of the Handbook, with a responsibility of the commissions. For details see Handbook_structure_and_responsibility_-_v2.pdf.

The Secretary Tomasz Delega presented the final draft of the General Regulations for Competitions. After discussion and voting, the final proposal will be submitted to GA for approval. For details see FIDE_General_Regulations_for_Competitions_-_final_2.pdf.

4. Refreshment courses about the Laws of Chess and General Regulations for Competitions

The Chairman underlined that this is a very important topic and he presented some proposals for the future. RC together with ARB should continue working on this matter. RC is supporting ARB proposal to have a seminar for IA title and to create Senior Lecturer title.

Some question received were discussed. All suggestions and remarks regarding the Laws of Chess are collected and will be presented during the next meeting.

There was a discussion about using or not using the move counter during the chess competitions. RC as well as ARB and TEC are in favor of using it, when possible. The majority of present rejected to create such recommendation for arbiters.

Mr. Chirstian Krause said a few words on behalf of Mr. Geurt Gijssen, previous chairman of the RC, who couldn’t attend the meeting. All present wish good health and all the best to Mr. Gijssen!

We would like to thank all present for their great contribution and help during the meeting. 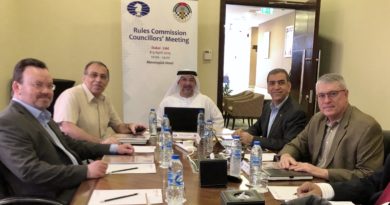 by IA Stéphane Escafre, FIDE rules commission Elena Polovina is an International Arbiter from Russia. She is also a woman